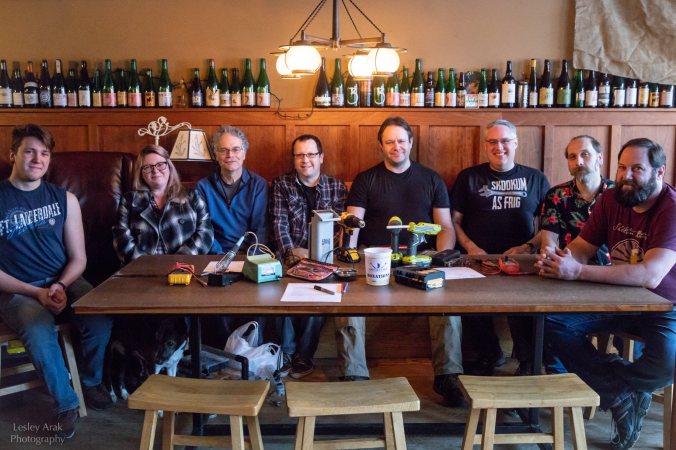 Repair Public started when a guy named Ben (fourth from right above) heard about the Repair Café concept that started in Amsterdam. He found a few wacky volunteers and a cozy place to host his first event, and it went well. People were excited, stuff was fixed, more events were requested, and more events have been delivered.

Ben basically helms this wacky operation as a glorified hobby that keeps him mostly out of trouble. He currently has a day job doing computer-related stuff, but he’s also turned wrenches and blistered his fingers as a mechanic on a vegetable farm. He’s lucky to have a lot of talented friends who keep showing up to help him with the mission of perpetual fixery.

Repair Public’s volunteer roster started out from Ben’s social media list, but branched out to include other community who expressed interest in lending their needles, threads, hammers, and/or wrenches.

Our first repair event was held at Seymour the Pub in Greenfield, MA at the behest of its owner and founder Nathan Hobbs. His enthusiasm, structure, patience, and support were instrumental in getting Repair Public off the ground.

Casey at The Hitchcock Center for the Environment in South Amherst then found us somehow, and offered us an awesome event location in their wonderful living building, which we’ve added to our rotating line-up of venues.

Sam, the owner and insatiable juggernaut behind New City Brewery in Easthampton, became involved when Ben waxed eloquent about the repair movement in Sam’s vicinity over a couple of Sam’s signature ginger beers. Enthusiastic about both community and turning screwdrivers, Sam bought into the concept immediately, and New City Brewery began hosting Repair Public.

The group shot above was taken in challenging lighting conditions by the phenomenal Lesley Arak Photography; you should hire her for her professional photography skills. No really, check out her portfolio; she’s not your average wedding photographer.